Motown Greats – Stevie Wonder, Marvin Gaye, The Jacksons and many more have changed our lives.

The 1960s and 70s are known for the Motown Greats! The ‘Motown Sound’, a style of soul music with a distinct pop influence.

Few know ‘Motown’ is a record company in the USA. Founded by Berry Gordy Jr. as Tamla Records in 1959, then incorporated as Motown Record Corporation in 1960.

In the 60s, Motown and its secondary labels (like Tamla Motown, the brand known outside USA) were the most successful supporters of what came to be known as the Motown Sound, soul music with a diverse pop influence.

Music, at its essence, is what gives us memories. And the longer a song has existed in our lives, the more memories we have of it’.

During the 60s, Motown attained huge success for such a minor record company with 79 records in the ‘Top Ten of the Billboard Hot 100’ record chart between 1960-69.

Listen to our Motown Greats Playlist from Spotify. 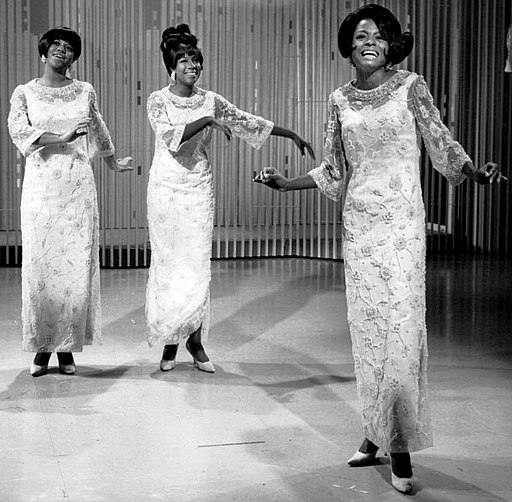 American singer, actress, and record producer Diana [Ernestine Earle] Ross was born March 26, 1944. Born and raised in Detroit, Michigan, Ross rose to fame as lead singer of vocal group the Supremes, which, during the 1960s, became Motown’s most successful act, and are the best charting girl group in US history, as well as one of the world’s best-selling girl groups of all time (Billboard 100). With an incredible record-setting twelve No.1 hit singles on the US Billboard Hot 100, including Where Did Our Love Go, Baby Love, Come See About Me, Stop! In the Name of Love, You Can’t Hurry Love, You Keep Me Hangin’ On, Love Child, and Someday We’ll Be Together.

In 1970 Ross departed the Supremes, and released her debut solo album, which contained the Top 20 hits Reach Out and Touch (Somebody’s Hand), and Ain’t No Mountain High Enough.

Her 1980 album Diana reached number 2 in the USA albums chart and spawned the Top 5 international hit I’m Coming Out.

Ross performed for the 54th Academy Awards with Lionel Richie.

Dana Elaine Owens known the world over more as ‘Queen Latifah’, is an American rapper, songwriter, singer, actress, and producer. Born in Newark, New Jersey, in 1970, she signed with Tommy Boy Records in 1989 and released her debut album All Hail the Queen the same year, featuring the hit single “Ladies First”. Just two years later her second, and final album with Tommy Boy Records, Nature of a Sista (1991).

For over five years [1993-98] Latifah starred FOX sitcom Living Single as Khadijah James. Her third album Black Reign (1993), produced the single “U.N.I.T.Y.”, which won a Grammy Award. She then starred in the lead role of Set It Off (1996) and released her fourth album, Order in the Court, in 1998, with Motown Records.

Latifha became a daytime talk show host on her own show The Queen Latifah Show, running from 2013 to 2015 on CBS.

The Jackson 5, now more commonly referred to as just the Jacksons, formed in 1964.

First participating in talent shows and performing in clubs, they went ‘professional’ in 1967, signing with Steeltown Records.

The Jacksons were the first group to debut with four consecutive number one hits (Hot 100) with the songs I Want You Back, ABC, The Love You Save, and I’ll Be There.

Gladys Knight & the Pips were an R&B/soul family act from Atlanta, Georgia.

Starting out as simply The Pips in 1952, derived from a cousin’s nickname, the founding members were Gladys Knight, brother Merald “Bubba” Knight, sister Brenda Knight and cousins William and Eleanor Guest.

Brenda Knight and Eleanor Guest were eventually replaced by another cousin, Edward Patten and a non-relative, Langston George in 1959. This line-up produced their first hit single, “Every Beat of My Heart”. After the single was released on three different labels, they changed their name to Gladys Knight & the Pips in 1961. Gladys Knight left in 1962 to start a family and re-joined in 64, this line-up continued until the group broke up in 89.

The group really reached success after signing with Motown Records (in 1966). If took a year and a half though before the group recorded their first hit single version of I Heard It Through the Grapevine (1967).

In 1989, the group disbanded with the Pips retiring and Knight embarking on a successful solo career.

Gladys Knight & the Pips are multiple Grammy and American Music Award winners and are inductees into both the Rock and Roll and Vocal Group, Hall of Fame in (1996, 2001). 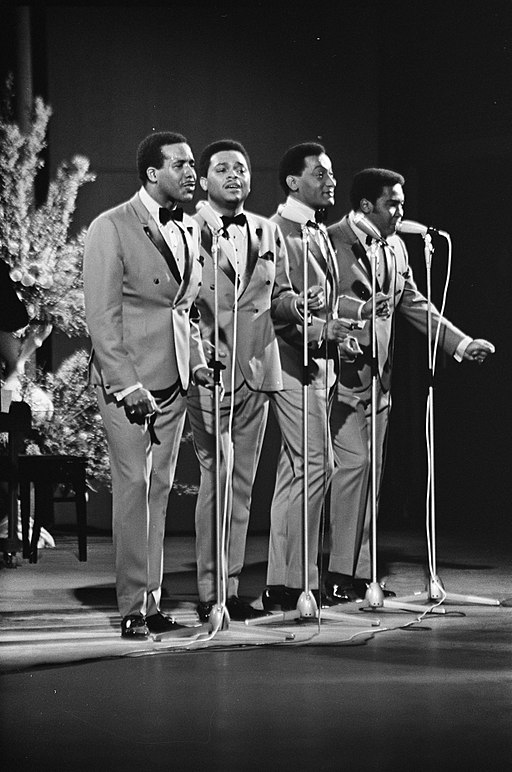 The Four Tops: four men in their 30s, comfortable in their supper club routine of standards, jazz phrasing and easily crooned harmonies. Lead singer, the great Levi Stubbs, and steered by the songs of Holland-Dozier-Holland. Reach Out, the fourth studio album is crammed with big hits – Reach Out I’ll Be There, 7 Rooms Of Gloom, I’ll Turn To Stone, Standing In The Shadows Of Love and Bernadette (all written and produced by H-D-H) plus their distinctive cover of The Left Banke’s Walk Away Renee.

Fakir, McNeir, Roquel Payton, and Harold “Spike” Bonhart, who replaced Peoples in 2011, are still performing together as the Four Tops. Fakir is the only surviving founding member of the group.

Marvin Pentz Gaye (born Gay Jr. 1939) a American singer, songwriter and record producer. Gaye in parts shaped Motown’s sound in the 1960s, an in-house session player first and later a solo artist with a string of big hits, Ain’t That Peculiar, How Sweet It Is (To Be Loved By You) and I Heard It Through the Grapevine, and duet recordings with Mary Wells, Kim Weston, Diana Ross and Tammi Terrell, later earning and not without warrant we might add the titles of ‘Prince of Motown’ and ‘Prince of Soul’.

The 1970s, gave us the albums What’s Going On and Let’s Get It On becoming one of the first artists in Motown (joint with Stevie Wonder that is…) to break away from the reins of a production company. After a time in Europe (being a tax exile) early 1980s, he went on to release the Grammy Award-winning hit “Sexual Healing” and its parent album Midnight Love.

News that shocked the world over was on April 1, 1984, Gaye’s father, Marvin Gay Sr., fatally shot Jnr. at home in Los Angeles. Since Jnr. death, many organisations have retrospectively bestowed awards and other honours – including; the Grammy Lifetime Achievement Award, the Rhythm and Blues Music Hall of Fame, the Songwriters Hall of Fame and the Rock and Roll Hall of Fame – all these titles are held by few artists. 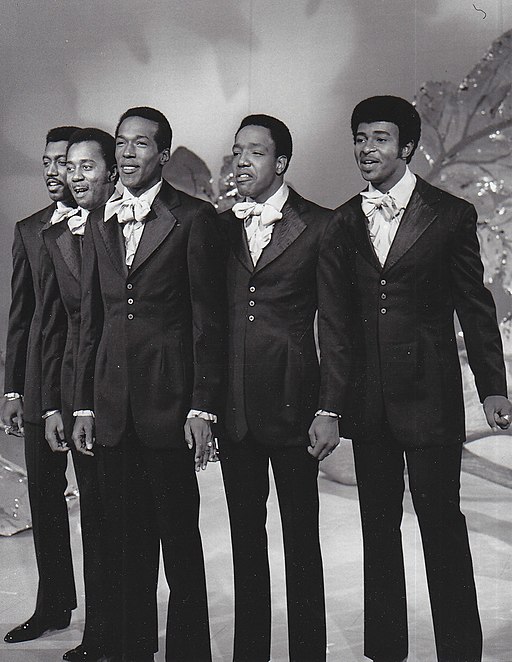 The Temptations are an American vocal group who released a succession of successful singles and albums with Motown Records in the 1960s and 70s. Working with Norman Whitfield, with Top 10 hit single Cloud Nine, was significant in the evolution of R&B and soul music. The band are known for their choreography, harmonies, and dress. Having sold tens of millions of albums, the Temptations are among the most successful groups in popular music.

Over their career, the Temptations released four Hot 100 number-one singles and fourteen R&B No.1 singles. They obtained three Grammy Awards and were the first Motown group to win a Grammy Award (Cloud Nine 1969), and a Grammy Lifetime Achievement Award (2013). Six of the Temptations (Edwards, Franklin, Kendricks, Ruffin, Otis Williams and Paul Williams) were inducted into the Rock and Roll Hall of Fame in 1989. Three classic Temptations songs, My Girl, Just My Imagination (Running Away with Me), and Papa Was a Rollin’ Stone, are among The Rock and Roll Hall of Fame’s 500 Songs that Shaped Rock and Roll. The Temptations were ranked at number 68 on Rolling Stone magazine’s list of the 100 Greatest Artists of all time.

The Temptations continue to perform with founder Otis Williams in the line-up. 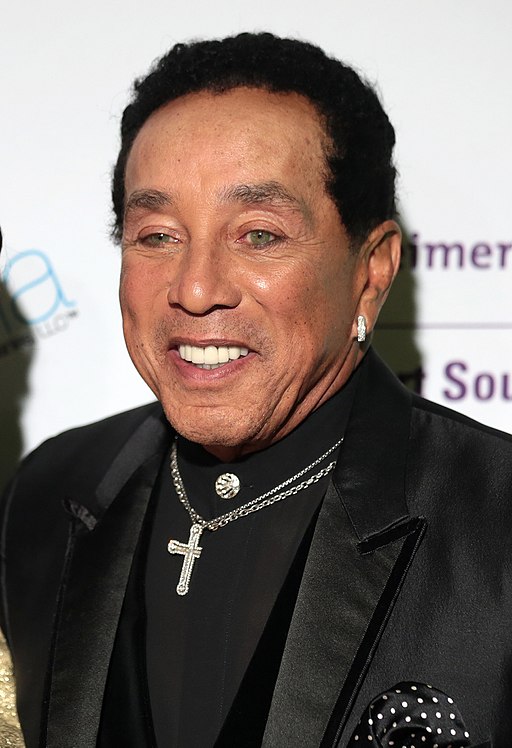 Smokey Robinson was a ‘King’ in Motown: the go-to songwriter and also lead vocalist of the Miracles.

His mega-hit Tears of a Clown (1967) started as an instrumental by Stevie Wonder and his producer Hank Cosby. Smokey said the music sounded like the circus, inspiring lyrics of a heartbroken man who feels like a sad clown.

First appearing in 67 on a Smokey Robinson and the Miracles album, however it didn’t become the mega-hit until three years later in a single.

Motown Greats… Martha and the Vandellas

Go anywhere in the summer of 1964 and all you heard was Martha and the Vandellas’ hit Dancing in the Street.

A simple dance song, we think not, as the civil rights movement adopted it as an anthem, some radio stations went as far as to remove it from their playlists.

Dancing in the Street has since been covered countless times by everyone from Van Halen to Mick Jagger and David Bowie.

Stevland Hardaway Morris more commonly known by his stage name Stevie Wonder – an American singer, songwriter, record producer, and multi-instrumentalist (born 1950). He has been blind since shortly after birth.

A child prodigy and considered one of the most critically and commercially successful musical performers of the late 20th century. Wonder signed with Motown’s Tamla label at the young age of 11 and continued performing and recording with them beyond 2010.

Among Wonder’s creations are Signed, Sealed, Delivered I’m Yours, Superstition, You Are the Sunshine of My Life and who can forget I Just Called to Say I Love You; and albums Talking Book, Innervisions and Songs in the Key of Life. Recording more than 30 American top ten hits and received an incredible 25 Grammy Awards.

Wonder is one of the most-awarded male solo artists, and has sold over 100 million records worldwide, making him one of the top 60 best-selling music artists.

Is 80s Culture Still Around Today?